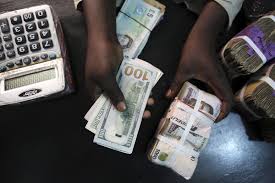 The adoption of a floating exchange rate by Nigeria on June 14 ,2016 was informed by similar challenges faced in the United States on June 2, 1929 when the U.S stock market crashed, triggering the Great Depression. Pulling out of the gold standard by England in 1931 is the modern day equivalent to floating a country’s currency, a policy that has just been introduced by CBN’s Godwin Emefiele and president Muhammadu Buhari with a view to equally lifting Nigeria out of the economic dungeon that it is currently trapped in.

Upfront, it is important to point out that Nigeria’s economic malaise is not in any manner ,shape or form comparable to the Great Depression; however some of the factors that had compelled Nigeria’s joining of the popular global economic trend of floating their currency are derived from the belief that during depression, a flexible exchange rate is critical.

With a weak aggregate consumer demand; falling oil prices; negative GDP growth; alarming inflation and unemployment rate as well as a huge backlog of payment of workers’ salaries by 27 state governments, situations that are currently the case in Nigeria, the nation is on the verge of a recession, which is why a flexible exchange policy is being adopted as a panacea.

Today, after about one year of resistance that resulted in severe economic crisis such as the downward slide of all development indices in Nigeria including dropping from the position of the world’s number 2 in global ranking of FDI destination , 2 years ago, the IMF president Christine Lagarde’s desire for flexible exchange regime in Nigeria is being fulfilled through the new policy announced by the CBN, June 14,2016.

Hopefully, with the flexible exchange rate regime’s take off from 20th June, it is speculated that the naira/dollar exchange rate which is now hovering around N365/$, would find equilibrium may be at around $250/$. If nothing else, the new fx regime would usher in some certainty which would ease planning for manufacturers and other entrepreneurs.

This means there is cause for economists, bankers and business men and women to celebrate the recent development in the financial services sector ,which seems positive, but Nigerians should be cautious not to create the erroneous impression that the creation of a flexible exchange rate regime would be a sort of economic nirvana and Eldorado signaling the reversal of all our economic woes. We can’t afford to be complacent enough to believe that the removal of fx trade restrictions is an end in itself and therefore a magic bullet that would relieve Nigeria of all the burden arising from plummeting crude oil price, corruption and maladministration over the years.

Right now, although Africa has comparative advantage in agriculture, the nation is unable to sustain her food need, how much less export and neither does she have any experience in the production of technological items such as iPhones, airplanes or even motor cars which provide incentives for countries to devalue or float their currencies to boost export trade.

At least that’s the justification that president Buhari and his close advisers had been holding onto and they have a point, but that cannot be a cogent excuse for sticking to a policy that is counter-productive for so long. Nigeria’s economy went bust as reflected by the challenges faced by Shehu Shagari’s govt from 1979 to 1984 when oil prices crashed from $30 to as low as $13 per barrel. The perilous times were carried over into the Buhari era as military head of state from 1984-1985, compelling the ban on foreign imports and introduction of queues for purchase of so called essential commodities comparable to the present situation in Venezuela.

The Ibrahim Babangida austerity measures, after he took over the reins of govt in 1985, birthed the Structural Adjustment Program, SAP of 1986, which was the alternative to taking the infamous IMF loan that then General Buhari detested and most Nigerians loathed.

Under the circumstances, the question remains, how do we obtain long term funding support for the real sector which should constitute the cornerstone of any economy of substance? How could policies that would boost the confidence of international entrepreneurs and encourage them to bring in Foreign Direct Investments, FDIs into Nigeria to boost growth in the real sector, be fashioned out and sustained? Is the recent decision to float the naira adequate catalyst, or a combination of both fiscal and monetary policies as FDR and Keynes did back in 1933 and what are the fall back positions of government, should the floating of the naira strategy prove not to be as efficacious?

The pertinent questions above, to me are what the authorities in charge of the economy should urgently seek viable answers to. Countries like Japan have been experimenting with the FDR economic stimulus model-referred to as Abenomics- named after current Japanese president, Shinzo Abe for decades without success.

If Japanese economy which is technologically driven with a plethora of high technological inventions and brands like Toyota to export has remained in deflation despite the FDR type financial stimulus so far implemented, what guarantees do we have in Nigeria that as naira is now being floated, FDIs would start flowing into our economy as flexible exchange policy advocates contend?

Perhaps the fact that Japan is home to the largest ageing population and therefore suffers from a vastly declined workforce and as such, has no room for further growth as the economy has attained saturation status, may be the constraint.

It may be argued that in contrast to Japan, Nigeria’s population comprised about 60% of youths and, therefore, enjoys the advantage of a virile workforce, plus abundant capacity for growth ,and these could result in a different and more positive outcome for Nigeria than it did in Japan.

Other factors that could influence a different and better outcome for Nigeria is that while Japan’s debt of roughly $9 trillion, which is almost double her GDP of about $5 trillion, is probably the reason the country is still stuck in stagflation (a worse type of deflation), despite application of several financial stimulus measures, opposite is the case in Nigeria where 13% post re-basement debt to GDP ratio is quite healthy. Hopefully, with ample room for growth in infrastructure investment, Nigeria is more likely to respond better to financial stimulus than Japan.

After all said and done, my honest view is that neither would devaluing or otherwise of the naira per se, nor would mere floating of the naira necessarily pull Nigerian economy out of the woods. Rather, the combination of both monetary and fiscal policies, in addition to a positive perception of a focused economic team being at the helm of affairs in Nigeria, instead of mere dependence on the body language of the president would be the game changer.

This implies that less interference by the presidency on economic matters would make a huge difference in the restoration of confidence in Nigeria by both local and international investors again.

Mr. President’s spectacular endorsement of a flexible foreign exchange rule for the Naira, in his opinion article in Wall Street Journal, WSJ, earlier in the week is a huge confidence booster , as it’s a marked departure from his initial hard stance. Once confidence returns, the dollars that have taken flight back overseas or buried in septic tanks in homes in Nigeria, would return to the economic system to fuel the engines of production once more. The good news is that President Buhari has undergone a lot of political metamorphosis in the past one year. That is no mean achievement.

Mr. President has also graciously accepted the removal of the controversial fuel subsidy which he initially opposed because he feared its removal would hurt the poor masses whose interests are very close to his heart and now the floating of the Naira, which he was initially vehemently opposed to, is today an official policy of Nigeria?

Most captivating of all the gestures is that the president appears to have backed down from his initial threat to apply deadly military force in quelling renewed insurgency in the Niger delta, to a negotiated settlement with the militants. Although the non-violent approach in the Niger delta is yet to yield the desired dividends, there is hope that dialogue would achieve better peace than matching violence for violence which would only result in peace of the grave yard in the treasure trove of Nigeria.

On the contrary President Buhari’s new attitude of not sticking to his guns (literally speaking) in my view is conditional to the new concepts being implemented more efficaciously than his original thoughts and with more positive outcomes.

Failing to ensure that these new measures that he has reluctantly acquiesced with, would yield quicker more positive turnaround of the fortunes of Nigerians, could result in disappointment to the president and cause him to revert to his comfort zone of command and control, which would not bode well for Nigeria and Nigerians. Therefore, in order to achieve a more holistic effect and better outcome of both the fiscal and monetary measures so far introduced, the next thing government should focus attention on is the yuan/ naira swap deal, struck during President Buhari’s recent trip to China. For the reasons earlier cited, the Chinese deal should be consummated without further delay.

After the take-off of the new flexible foreign exchange trading system, the CBN should shift focus to how to add flesh to the bones which the much vaunted yuan/naira swap has been since it was announced. That would simultaneously enhance Nigeria’s foreign trade with both the Western world- USA/Europe and Eastern world -China/Asia, our country’s two largest trading market partners.

Right now, whether President Buhari’s positive change in economic outlook by becoming less tedious and having an expanded and broader world view would gain momentum and be sustained is a prospect that Nigerians are anxiously trying to decipher.

Nevertheless, a combination of plummeting oil revenue resulting in the present economic meltdown, plus a floating Naira may not augur well for a nation in dire need of economic elixir, if the leadership is not dynamic and astute.

Worse of all, the nation may be in double jeopardy if the new policies are truncated as opposed to being pursued to their logical conclusion.

So our prayers should be that Nigeria makes it through the dark hours.

Interrogating the Ogbanje/Abiku Spirit of the Electoral Act Amendment Bill

Negotiation as Antidote to Epidemic of Separatism in Nigeria